Snatching defeat from the jaws of victory: How ISAF infighting helped doom Sangin to its ongoing violence

Sangin district in Helmand has again, this year, seen heavy fighting, this time between the Afghan National Security Forces and the Taleban. With dozens killed and thousands displaced following an insurgent assault involving hundreds of fighters, the Taleban leadership is once again showing how much it values this strategic crossroads and poppy-producing hub. Guest author Julius Cavendish,* who reported on fighting in Sangin in 2010 and 2011 and is following what’s happening in the region closely since, has been looking into the background of one of the most contested districts in the country. He reveals how ISAF repeatedly squandered the chance to build a durable political settlement in the district, including bombing a meeting of Taleban while they were discussing going over to the government. He argues that institutional dysfunction and competing agendas within the coalition helped ensure that the generals and bureaucrats overseeing the campaign in Helmand repeatedly undermined efforts to build a lasting peace. (With additional reporting by Muhib Habibi in Kandahar.)

On 20th November 2010, Taleban commander and shadow district governor Mullah Abdul Qayum met all afternoon with other disaffected insurgents in his high-walled garden in southern Afghanistan. According to local elders and British officials, the men — incensed by months of brutality by out-of-area insurgents — were plotting to hand one of Afghanistan’s most violent districts over to government control. It was a brazen double-cross that would, Qayum and his accomplices hoped, finally bring peace to their valley. Now, following months of secret correspondence with Afghan and British officials, they wanted a demonstration of government good faith. That is when a NATO bomb slammed into the meeting. END_OF_DOCUMENT_TOKEN_TO_BE_REPLACED

Guinea and its iron ore: Let the people benefit, for once

BURIED beneath the mist-capped mountains of south-eastern Guinea is one of the world’s biggest deposits of iron ore. Estimated at around 2.2 billion tonnes, the Simandou concession contains almost as much as the entire global iron-ore industry produced in 2013. Thanks to its size and unusually high quality, some experts say that whoever controls Simandou may dominate the world’s iron-ore sector for a generation. END_OF_DOCUMENT_TOKEN_TO_BE_REPLACED

Mali and the Sahel: The war is far from over

SEVEN weeks ago Moussa Mara was the rising star of Malian politics. Picked by Ibrahim Boubacar Keita, the country’s president, to be prime minister at the age of 39, he had a reputation as a shrewd and capable administrator. An eventual rise to the top seemed possible. When he defied warnings on May 17th and visited Kidal, a hotbed of ethnic Tuareg separatism in the far north-east of the country, he was met by rebel gunfire. This made him a hero to the crowds in the capital, Bamako, for standing up to secessionists seeking to destroy the country’s unity (see map). END_OF_DOCUMENT_TOKEN_TO_BE_REPLACED

Some of the people herded into more than 20 such centres across Libya were intercepted by Libyan naval vessels as they attempted the perilous journey across the Mediterranean. Others were arrested before reaching the sea by Libyan militias that have held sway since the revolution that toppled Muammar Qaddafi in 2011. END_OF_DOCUMENT_TOKEN_TO_BE_REPLACED

END_OF_DOCUMENT_TOKEN_TO_BE_REPLACED

Senegal’s Casamance region: The next hot place to go on hols? 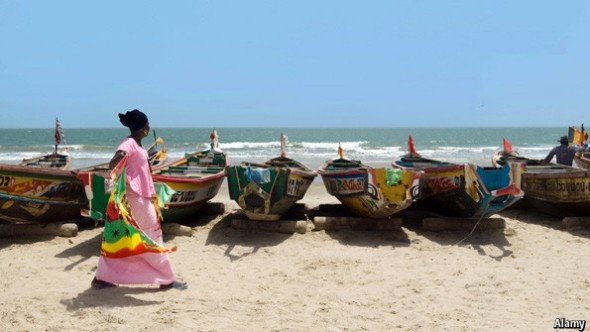 ITS travel-brochure beaches, endless tracts of mangrove and lagoon, and a sedentary pace of life once made Casamance an understated tourist destination. Then rebellion and banditry turned this slim spit of land, which belongs to Senegal but is sandwiched between Gambia and Guinea Bissau, into yet another west African troublespot. Since 1982 an insurgency has flared with varying intensity, most notably between 1993 and 1998 when fighting left over 1,000 people dead. Instead of securing the region’s independence, violence has left it isolated and underdeveloped. END_OF_DOCUMENT_TOKEN_TO_BE_REPLACED

Ivory Coast and the ICC: Will justice ever be even-handed?

ON MARCH 22nd Charles Blé Goudé (pictured), an Ivorian widely known as the “street general”, was flown from the Ivory Coast to The Hague, to be charged at the International Criminal Court (ICC), alongside his patron, Laurent Gbagbo, the previous Ivorian president, with four counts of crimes against humanity. Mr Blé Goudé is alleged to have masterminded an ethnic pogrom after Mr Gbagbo’s defeat at the polls in 2010. Mr Blé Goudé had been in prison in the Ivory Coast for 14 months at the behest of its current president, Alassane Ouattara, following a year-and-a-half on the run.

END_OF_DOCUMENT_TOKEN_TO_BE_REPLACED

IN THE lobby of Bamako’s El-Farouq hotel, Ould Mohamed Ousmane Omar, a middle-aged Malian Arab whose life has been one of exile, rebellion and plot, is gossiping about friends and enemies. Take the Tuareg rebels, whose 2012 rebellion precipitated the fall of northern Mali to al-Qaeda-linked extremists. “They’re only in it for their own gain,” he says, adjusting the white veil of his turban to reveal a wisp of goatee. Or Mali’s new government, which, he grimaces, “knows nothing—not the north, not the Tuareg, not the problems. It’s so easy to fool.” As for his own faction, the Arab Movement of Azawad (as some northern Malians call their homeland), Mr Omar can only lament that an international conspiracy to thwart its potency has cracked it down the middle. But then again, he says, few of his erstwhile colleagues were ever more than “second-class” and “drug dealers”. END_OF_DOCUMENT_TOKEN_TO_BE_REPLACED

KING Muhammad VI of Morocco’s trip to Mali could not have gone better. Ibrahim Boubacar Keita, Mali’s president, and his entire cabinet were waiting on the tarmac to welcome the monarch off his jet on February 18th. When the king bestowed Morocco’s highest honour on Mr Keita, he promptly renamed a boulevard in Bamako after him (Muhammad’s name is emblazoned on a red and green billboard). Over five days of pomp, pageantry and public displays of affection, Muhammad signed 18 agreements, covering microfinance to defence and energy. He is hoping to do the same in Ivory Coast, Guinea and Gabon, the remaining stops on his tour. END_OF_DOCUMENT_TOKEN_TO_BE_REPLACED

Taken down a peg

A former coup leader is dragged to court

IT SEEMS unlikely that Amadou Sanogo will be remembered for much other than his incompetence. The Malian army captain bungled his way to power last year as leader of a coup, clearing the way for ethnic rebels and religious extremists to take over half the country. His clumsy posturing isolated Mali diplomatically and brought it close to ruin. Only popular discontent and bloodthirsty supporters lent the captain—a man of much ego and little talent—a measure of power. Until now. END_OF_DOCUMENT_TOKEN_TO_BE_REPLACED