IN THE lobby of Bamako’s El-Farouq hotel, Ould Mohamed Ousmane Omar, a middle-aged Malian Arab whose life has been one of exile, rebellion and plot, is gossiping about friends and enemies. Take the Tuareg rebels, whose 2012 rebellion precipitated the fall of northern Mali to al-Qaeda-linked extremists. “They’re only in it for their own gain,” he says, adjusting the white veil of his turban to reveal a wisp of goatee. Or Mali’s new government, which, he grimaces, “knows nothing—not the north, not the Tuareg, not the problems. It’s so easy to fool.” As for his own faction, the Arab Movement of Azawad (as some northern Malians call their homeland), Mr Omar can only lament that an international conspiracy to thwart its potency has cracked it down the middle. But then again, he says, few of his erstwhile colleagues were ever more than “second-class” and “drug dealers”. END_OF_DOCUMENT_TOKEN_TO_BE_REPLACED 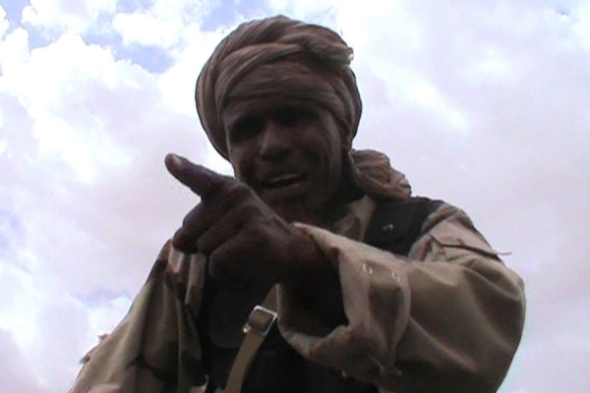 Oumar Ould Hamaha is a one-man whirlwind of piety and fury. For more than a decade he has —  by his own account and others — raided government outposts in Mauritania, Algeria and Niger; held Western hostages for extravagant ransoms; and proselytized a ferocious asceticism over the barrel of a gun. Riding with al-Qaeda in the Islamic Maghreb, he has crisscrossed the shadowless Sahara in the service of a god he envisions as unforgiving as the desert itself. He has invoked Koranic verses to protect himself from the “evil work of devils” and “the biting of snakes and scorpions,” learned to navigate by the sun, moon and stars, and believes that meteor showers are battles between djinns and angels. It has been a ferocious transformation for a former student of accounting. END_OF_DOCUMENT_TOKEN_TO_BE_REPLACED

GUNFIRE pierced the night quiet. For weeks, inhabitants of the ancient desert towns of Gao and Timbuktu had feared that rival Tuareg rebels would clash. Between January and March they had together waged a devastatingly effective campaign against Mali’s army, sending its last troops packing in early April and proclaiming an independent state called Azawad. But the rivalry then flared, and lawlessness and factionalism have been rife since. END_OF_DOCUMENT_TOKEN_TO_BE_REPLACED

Ali Cissé, 30, a shopkeeper, couldn’t contain his curiosity when a new wave of gunmen rolled into town. Outside the governor’s compound in downtown Gao — a dusty administrative center of adobe architecture and open skies — he saw a fleet of armored vehicles with foreign fighters standing guard. “I saw [militants] from Niger, Pakistan, Algeria, Mauritania [and] Tunisia,” Cissé tells TIME by phone from northern Mali. “I identified them by their accents because they like approaching people… to try to win their [sympathy].” Whatever their provenance, the fighters had one thing in common: they rode with Ansar Eddine, a group at times almost indistinguishable from al-Qaeda in the Islamic Maghreb (AQIM), the regional terror franchise. END_OF_DOCUMENT_TOKEN_TO_BE_REPLACED

It took Ibrahim Touré three weeks to escape from Timbuktu after rebels seized the desert town, but, in his heart, he hasn’t really left. The 26-year-old shopkeeper studies the floor as he talks, cradling a welter of scabs and fresh scar tissue on his right elbow. Sometimes he stops to rub his head with an uncertain hand — the unforgiving sun, maybe, or a reaction to the horrors he has seen and suffered. If what he says is true, then the fog of war in northern Mali — where Tuareg separatists, Islamic militants, Arab militias and a hodgepodge of terrorist groups are vying for control following a spectacularly successful military campaign — is concealing a grisly spate of human-rights abuses, humanitarian suffering and war crimes. END_OF_DOCUMENT_TOKEN_TO_BE_REPLACED

EVERY morning a bus caked in dust pulls into Bamako bringing the latest rumours of war. Looking dazed and dehydrated after 24 hours on the road, Mohammad Maiga explains how Tuareg separatists and Islamist militants have turned his native Gao, northern Mali’s most populous town, into a ghost town. “Everyone is leaving,” says Mr Maiga. “There’s no food, no supplies.” Blackouts last all day. Banks and offices have been pillaged by rampant rebels. END_OF_DOCUMENT_TOKEN_TO_BE_REPLACED 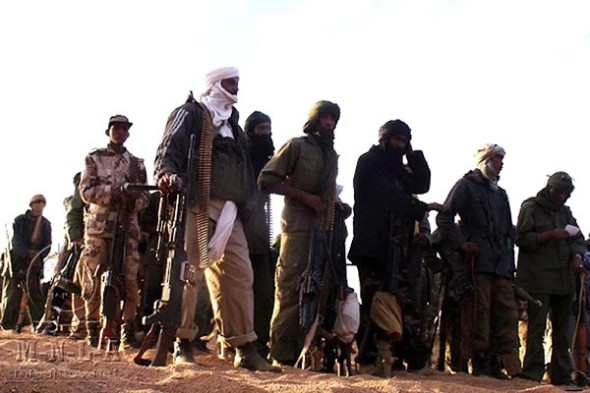 Caked in dust and bristling with weaponry, the Tuareg rebels smiled at Neil Whitehead and Diane English. “It’s okay, we’re here for your protection,” one of the veiled warriors grinned at the nervous couple. Caught up in the middle of a war after Tuareg separatists advanced hundreds of miles in a matter of hours, the hotel-owners had tried twice already to leave their adopted home of Timbuktu. At first, retreating army columns had blocked their way. Then, when the road eventually cleared, English and Whitehead ran straight into a firefight. “There were guns going off all around us and tracer going past the cab windows, and we thought, ‘This isn’t good’,” English says, with a flash of understatement. END_OF_DOCUMENT_TOKEN_TO_BE_REPLACED

Amid fears that Islamic extremists were taking advantage of the political upheaval, three of al-Qaeda’s leaders were said to have headed to the ancient trading city of Timbuktu, where Sharia was being imposed and women were being told to wear veils. END_OF_DOCUMENT_TOKEN_TO_BE_REPLACED 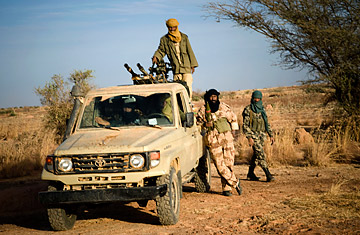 Somewhere close to the Algerian border a delegation of Tuareg notables hurried through the desert for a summit. It was mid-March and there was dissension among them. One of their own, a renegade desert warrior called Iyad ag Ghali, had just thrown the Tuaregs’ meticulously plotted rebellion against the Malian government into jeopardy. In proclamations appearing on YouTube, ag Ghali’s spokesman had done everything that the committee behind the two-month-old uprising by Tuareg rebels wanted to avoid. “It is our obligation to fight for the application of Shar’ia in Mali,” the spokesman said. The poisonous phrase, seized eagerly by a Malian government smarting from military defeat, undid months of careful political messaging. Now everyone would think the Tuareg were in bed with al-Qaeda. END_OF_DOCUMENT_TOKEN_TO_BE_REPLACED

Un-Welcoming the Presidents: The Mali Junta Digs In

A contingent of regional leaders turns its plane away as the Mali Junta appears to solidify, learning how to spin and propagandize. But trouble looms

They pumped their fists in the air. “Shame on Africa,” they cried. And then the protesters swarmed across the runway at Bamako international, trampling over the red carpet laid out for visiting dignitaries. With a jet carrying presidents from five West Africa countries inbound, it was an eloquent statement of what many in Mali’s military junta think about international condemnation of their coup — even if the soldiers in charge didn’t explicitly order up the demonstration. END_OF_DOCUMENT_TOKEN_TO_BE_REPLACED