Hezb-i-Islami leader Gulbudin Hekmatyar was seen out and about in Nuristan earlier this spring. Here’s (maybe) why

Not one to shy away from making trouble, Nuristan provincial governor Jamaluddin Badr did his best earlier this year to discredit one of his subordinates—and rivals—the nominally pro-government Hezb-i-Islami strongman, Maulawi Sadeq, sources have told me.

Sadeq came over to the government last year, and is credited with keeping a lid on things in Kamdesh district. But as Badr tried to turn local elders against Sadeq, everyone began to fear a change of leadership. Enter Hekmatyar. After attending Friday prayers in Kamdesh in late March or early April, he made a point of being seen about town.

“Whether or not that’s what he normally does, it sends a message of support [to Kamdeshis], to show that Hezb-i-Islami has invested there and they’re not going anywhere,” a Western diplomat says. Hekmatyar paid Kamdesh a second visit later in April, presumably for the same reason. END_OF_DOCUMENT_TOKEN_TO_BE_REPLACED

As Nato prepares to pull out, the Taliban is positioning itself to step into the vacuum

A suicide bomber has killed the mayor of Kandahar City, depriving the Afghan President, Hamid Karzai, of yet another ally in southern Afghanistan just as Nato troops start pulling out of the insurgency-wracked country.

The murder of Ghulam Haider Hamidi, a childhood friend of the Karzai family and a naturalised US citizen, who had returned to Afghanistan at the President’s personal request, comes just two weeks after a trusted bodyguard gunned down Ahmed Wali Karzai, the President’s half-brother.

The hit eliminates one of the leading contenders to become Kandahar’s next governor, leaving the way open for Gul Agha Sherzai, a bear of a man who dispenses patronage like one of Afghanistan’s kings of old. A nominal Karzai ally, Mr Sherzai will almost certainly consolidate lucrative Nato contracts and drugs revenues for his own family if he gets the nod, diminishing Mr Karzai’s influence in the south. END_OF_DOCUMENT_TOKEN_TO_BE_REPLACED

The latest victim in a string of killings of local officials loyal to President Hamid Karzaai, Ghulam Haider Hamidi tried to build good governance against the odds

An honest man in a city of thieves, Kandahar mayor Ghulam Haider Hamidi once exemplified hopes that the U.S.-led nation-building effort would leave behind a better Afghanistan. His killing by a suicide bomber on Wednesday, less than two weeks after the slaying of Kandahar’s strongman provincial council chairman Ahmed Wali Karzai, underscores the declining prospects of the Western military mission there.

“More than 50 percent of the violence comes from these corrupt people, the ones who sit with you and smile,” Hamidi told the Washington Post earlier this year. The former accountant had returned to Kandahar in 2007 after 30 years in the United States. Having been invited to serve as mayor by his childhood friend Afghan President Hamid Karzai, Hamidi said goodbye to the comfort of his northern Virginia home and threw himself into the maelstrom of the southern Afghan city’s politics. He initiated a slew of projects — from paving roads to collecting taxes and building schools — intended to revitalize the city, and made a name for himself trying to root out graft and curb the power of local strongmen and warlords on whom he blamed Kandahar’s ills. END_OF_DOCUMENT_TOKEN_TO_BE_REPLACED

Covert forces of CIA-trained Afghan paramilitaries are being built up to continue the US-led war on the Taliban as thousands of US troops prepare to leave the country.

Members of one shadowy group of some 400 men in southern Kandahar province have given The Independent a unique insight into their training and secret operations against militants as foreign troops prepare to quit Afghanistan by 2014.

Senior figures within one of the forces revealed that they were taught hand-to-hand combat by foreign military advisers, were delivered to targets by US Black Hawk helicopters and have received a letter of thanks from President Hamid Karzai for their work. END_OF_DOCUMENT_TOKEN_TO_BE_REPLACED

The second high-profile assassination of an Afghan politician in a week, the killing of Hamid Karzai’s long-time adviser Jan Mohammad Khan has Afghans worrying that anyone close to the President is a target

Gunfire rang out again Sunday night in Kabul, first as single shots and then in stuttering bursts, as two gunmen stormed the villa of President Hamid Karzai’s long-standing confidante Jan Mohammad Khan. Armed with AK-47s and grenades, the attackers shot their way into the compound in a leafy quarter of Kabul called Kart-e-Sey, at around 8 p.m. They knocked out Khan’s son with the butt of a rifle and killed a guard, according to an officer on the scene with Kabul’s criminal-investigations department. Then they shot Khan as he sat on a couch, chatting with a member of parliament who had come to visit.

Khan and the MP Mohammad Hashem Watanwal died instantly, but what followed ran for eight and a half hours as the attackers took hostages and holed up inside the villa. A rapid-reaction force from the Afghan police and intelligence services slowly closed the net, killing one assailant with a direct shot and freeing the last of the hostages shortly before midnight. As dawn broke, and the house burned after the gunmen threw 13 grenades according to one police source, counter-terrorism officers and their foreign advisers ended the siege, blowing apart the wall of the bathroom in which the last surviving attacker was concealed, killing him.

That was the easy part. Khan’s death is the second high-profile assassination of an Afghan politician in a week, and will almost certainly add to the shivers of uncertainty rippling across Afghanistan. His peach-colored compound may hardly have been Fort Knox (Khan apparently sent all but one of his guards home each evening) and the Uruzgan strongman may not have been the power that once he was. But taken in conjunction with the assassinations of President Karzai’s half-brother on July 12, and the police chief for northern Afghanistan, General Daud Daud, earlier this summer, Khan’s killing plays right into the Taliban narrative that no one, no matter how close to Karzai, is safe from their assassination campaign. END_OF_DOCUMENT_TOKEN_TO_BE_REPLACED

More civilians are dying in Afghanistan than at any time during the past decade, a new United Nations report says, as the war spreads to previously safe parts of the country and insurgents increase their use of suicide bombers, child soldiers and homemade bombs. Afghanistan’s grim arithmetic for the first six months of the year includes 1,462 civilians killed, 80 per cent of them by insurgent groups, and another 2,144 wounded: a 15 per cent jump on the same period in 2010.

“The rising tide of violence and bloodshed in the first half of 2011 brought injury and death to Afghan civilians at levels without recorded precedent in the current armed conflict,” the UN mission in Kabul said yesterday.

It added that there was every likelihood the true total is higher than reported, because the closure of one of its offices following a deadly attack had left it unable to collect some data. END_OF_DOCUMENT_TOKEN_TO_BE_REPLACED

Will the Karzai Clan Be Able to Hang On to Kandahar?

After the President buried his half-brother, he appointed another sibling to lead their tribe. But will that prevent a rebalancing of power in the troubled province?

They came to bury Ahmed Wali Karzai from Afghanistan and beyond, flying in on charter planes and arriving in armored convoys to pay their last respects to the man dubbed the “King of Kandahar.” Family and friends joined a funeral cortege of thousands as it made its way, under the watchful guard of helicopter gunships, from Kandahar City to the small village 12 miles away, where the Afghan President’s half-brother was born in 1961. Among the mourners were government ministers, parliamentarians and provincial governors, some dabbing their eyes with the silk of their turbans. Shortly after 7 a.m. on Wednesday, President Hamid Karzai slipped off his moccasins and stepped into his half-brother’s grave to bid the Kandahar strongman a last goodbye. Their relationship may not always have been easy, but those close to Karzai say it ran deep, and that the President has been devastated by Ahmed Wali’s murder.

Then the King of Kandahar’s brother was off from the village grave, whisked away in a motorcade of black SUVs before anyone could make another attempt against the Karzai family. (One guest had been less lucky but still fortunate, saved from a Taliban bomb blast as he traveled to the funeral by the reinforced armor of his car.)

Back in Kandahar City at a fortress-like mansion, Karzai’s first task was to anoint a successor to Ahmed Wali as de facto leader of the Popalzai tribe, from which the Karzai family hails. It was from his role as a tribal leader that Ahmed Wali drew much of his power, and Karzai chose another half-brother, Shah Wali Karzai, crowning him with a turban in front of the assembled chieftans. “Tribal leaders have proposed for me to replace martyred Ahmed Wali Karzai with Shah Wali Karzai as your tribal elder,” Karzai intoned. It was the President’s first move to repair the vast tear in Kandahar’s political fabric that Ahmed Wali’s death has left. END_OF_DOCUMENT_TOKEN_TO_BE_REPLACED

On the campaign trail with AWK 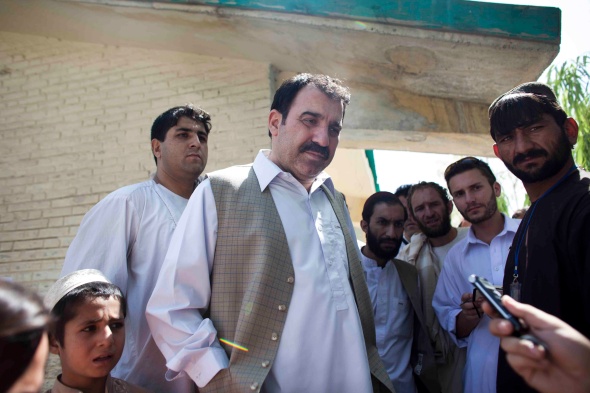 Politician was vital to Hamid Karzai’s fight against Taliban

Ahmed Wali Karzai, half-brother to the Afghan President and one of the country’s most powerful politicians, was assassinated by a bodyguard yesterday, leaving a power vacuum in a crucial province as foreign powers prepare to start withdrawing troops.

Mr Karzai was shot in the head and the chest as he met constituents at his home in Kandahar. Witnesses told The Independent that the assailant, a bodyguard and long-term family friend called Sardar Mohammad, interrupted a meeting between Mr Karzai and two other local politicians.

Waving a file and citing personal business, Mohammad asked to speak privately with his boss. Moments after they stepped next door, shots rang out. Guards shot Mohammad and rushed Mr Karzai to hospital but he was dead on arrival. END_OF_DOCUMENT_TOKEN_TO_BE_REPLACED

What the headlines tell us

There’s an ironic juxtaposition of AFP headlines this morning. First up is:

Taliban summer attacks down on last year: Petraeus ATTENTION – ADDS Panetta visit KABUL, July 10, 2011 (AFP) – Insurgent attacks against foreign and Afghan forces in Afghanistan are down this summer, defying projections by intelligence analysts, General David Petraeus said. The top commander in Afghanistan said attacks were down by “a few percent” for May and June, the beginning of the traditional annual fighting season, although he said the number of homemade bomb explosions had risen.

Seven deminers beheaded in Afghanistan HERAT, Afghanistan, July 10, 2011 (AFP) – Seven of 28 deminers kidnapped in the western Afghan province of Farah last week were beheaded by their abductors and their bodies recovered Sunday by police and tribal elders, police said. The mine clearing workers had been snatched on Wednesday in a district that is the focus of the Taliban insurgency in the province, but no one had claimed responsibility for the kidnapping.